We're pleased to announce that DPBuddy 3.1 is now available. The main feature of this release is the DPBuddy command-line interface (CLI). All of DPBuddy's Ant tasks can now be executed as shell commands without having to create or run Ant build files.

For example, to import a file, you can run the following command:

All attributes of DPBuddy's Ant tasks are translated into command line options, so that DPBuddy commands have the same capabilities as Ant tasks.

Another important feature is the substantially expanded "import" command/task. It provides the following new capabilities:

Other new features in this release include the following:.

If you'd like to try implementing version traceability, download the trial version of DPBuddy if you haven't done so already.

We're on track to release DPBuddy 3.0.1 later this month, April, 2014. Some of the newly added features include:

Other new features coming in 3.0.1 include:

How to Track Versions of DataPower Services

A version traceability mechanism should allow us to see versions of all our application components. An applications with UI front-end could have a "help/about" page or use other ways to show its version to an end user or to a developer. On the back-end, the version might be embedded into a manifest file or an application-specific property/configuration file. The version is typically associated with a code baseline stored in a version control repository.

This article explains how to track version of DataPower objects and services.

Secure backup is the only way to backup the entire DataPower device, including keys and certificates. Therefore, it is desirable to run it on a regular basis.

You can easily automate secure backup using DPBuddy. This post explains how.

The part before "?" looks like xpath. But what schema is this xpath based on? There is no "protocol" element in the DataPower XML management schema. The part after "?" that uses name-value parameters is even more odd. Why use this instead of proper xpath? After all, DataPower has an XML-processing engine with full xpath support, so it would certainly be more logical to rely on XML standards.

The bottom line is that while deployment policies are useful, they have limitations. They have to be developed using Deployment Policy builder in WebGUI. They can only be applied to configuration elements supported in WebGUI. For example, creating a deployment policy that updates RemoteEndpointPort of a Web Services Proxy proves to be a non-trivial task.

This is why we added support for xpath-based transformations to our DPBuddy DataPower management tool. Instead of dealing with the obscure syntax of DataPower deployment policies, developers can simply look at the configuration export file and specify an xpath expression against this file. It is also possible to specify filters based on the types and names of DataPower objects.

END_OF_DOCUMENT_TOKEN_TO_BE_REPLACED

SoapUI is the de facto standard tool for testing Web services and APIs. It is used by many DataPower developers. However, when SoapUI is used to test DataPower services that rely on XSLT files or other artifacts that have to be authored locally, having to manually upload these files to the device could substantially impair a developer's productivity.

File uploads and many other test preparation steps can be easily automated using DPBuddy. All that is required is to invoke an Ant target containing DPBuddy's copy task from the setup script of a SoapUI test step or a test suite. This guide explains how to do it.

How to Version Control DataPower Configuration

It is desirable to keep the configuration of DataPower objects and services under version control. The are many advantages to this approach: being able to re-install a release of an application (of which DataPower configuration could be a component), reverting to an older version of the configuration, being able to diff versions (including diffing across environments) and so on. DataPower itself has built-in support for checkpoints and configuration diffing, but it's no match for what can be done with a version control tool, especially the one that has a light-weight branching model such as Git.

You can find more details about version-controlling DataPower configuration here.

If you're using Eclipse for developing IBM WebSphere DataPower artifacts (xslt, schemas, etc.) you can easily configure DPBuddy to automatically copy your artifacts to the appliance and do various other chores. All you need to do is to define an Ant file with DPBuddy tasks and configure the Ant file as a builder for your project.

You can find the detailed steps for configuring Eclipse and DPBuddy here.

DPBuddy 3.0 has been released and is currently available for download.
DPBuddy 3.0 comes with a long list of new features and a number of bug fixes and performance improvements. Please see DPBuddy Feature List for more details. 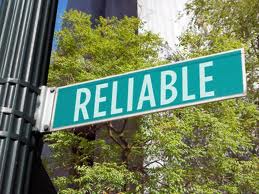 Configuring JMS in WAS could be quite confusing due to large number of settings and configuration resources (destination, queue/topic, connection factory, activation spec).

One of the most confusing aspects of this configuration is the quality of service (QOS) settings that deal with message reliability.

END_OF_DOCUMENT_TOKEN_TO_BE_REPLACED

What is the Best Tool to Replace Ant With?

At this day and age there is no reason to continue using Ant. Ant was a great tool for its time but this time has passed.

There are basically three build tools that can replace Ant: Maven, gradle and Buildr.

Out of all three, Gradle has the best integration with Ant. It allows for using existing custom Ant tasks pretty much without any changes. It also allows for importing Ant scripts into Gradle build script. Gradle tasks can even depend on Ant targets (and vice versa). There is also easy access to Ant properties.

END_OF_DOCUMENT_TOKEN_TO_BE_REPLACED

IBM recently published a statement of directions to release "virtual editions" of IBM WebSphere DataPower XG45 and XI52. These are probably two the most popular DataPower models.
DataPower functionality ("firmware") will be implemented as a VMWare VM.

This will greatly simplify use of DataPower for development. For example, development and test instances can be implemented as VMs, whereas production could remain hardware appliance-based.

Hopefully, this will also lead to increased popularity of DataPower platform as it makes it easier for potential customers to try it out (will we see a trial version of DataPower?).

Many developers utilize Eclipse for editing Ant files. Ant editor in Eclipse is fairly powerful, this article provides a good overview of its capabilities.

One of the most useful features is auto-complete for Ant tasks. Just press Ctrl-space and you'll see all attributes and nested elements supported by the task.

Just type '<dp:' (assuming that this is the prefix you assigned to DPBuddy's antlib) and then Ctrl-space and you'll see the list of all DPBuddy's tasks. Pressing Ctrl-space anywhere after the name of the task shows the list of attributes or nested elements. 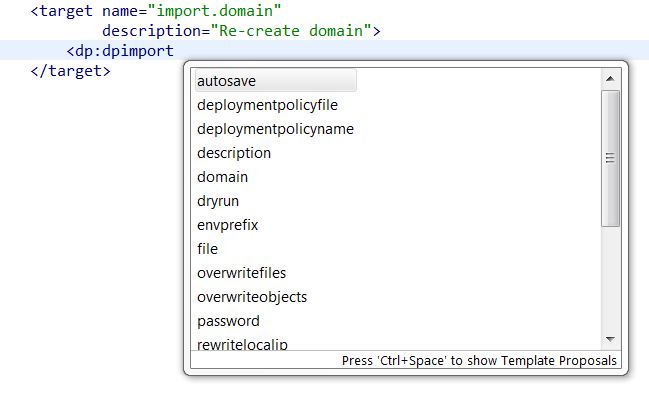 Unfortunately, auto-complete won't display help for custom tasks. Apparently description of Ant tasks is embedded inside Eclipse and does not seem to be extendable.

Release 2.3.2 of dpbuddy fixes a single but significant issue preventing copying files (using dp:copy command) to the hard disk array. RAID is mounted under local: filesystem on the device; the name of the mount point can be found under Administration/Storage Devices/Hard Disk Array in WebGUI.

SOMA "CreateDir" action errors out when it is used to re-create the RAID mount directory. In this release of dpbuddy logic was added to ignore the error.

The updated DPBuddy package can be downloaded from dpbuddy download page.

Please refer to this article.